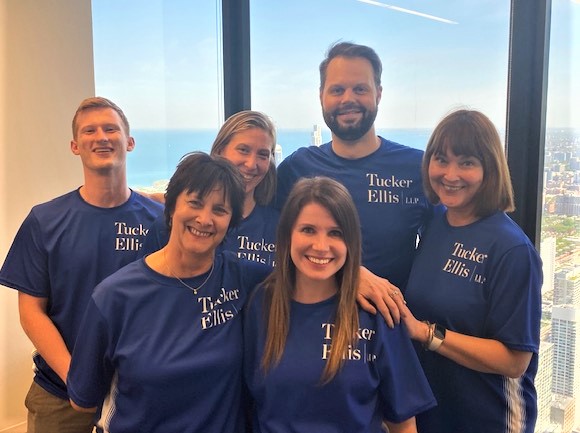 On May 13, members of the Tucker Ellis Chicago Hallway rode in “Cycle for Survival,” an annual event led by Memorial Sloan Kettering Cancer Center (MSK) to raise funding for research and clinical trials of rare cancers. Cycle for Survival’s goal is to beat rare cancers, which affect about 50% of people diagnosed with cancer. Rare cancers include liver, brain, pancreatic, ovarian, stomach, all types of pediatric cancers, and many others. Research for rare cancer is typically underfunded, leaving many patients with few or no treatment options. Over the last 16 years, Cycle for survival has raised over $308 million, all of which has funded MSK’s rare cancer research.

This year marked the Chicago Hallway’s fifth year participating in Cycle for Survival and was particularly meaningful as the team dedicated their ride to Tami Jaskiewicz, their extraordinary secretary who recently began her battle against liver cancer. The team – including Sherry Knutson, Julie Callsen, Andrea Przybysz, Jay Shultz, Brittany Weiss, Connor Doughty, and Kristy Pluth – set a personal fundraising record of more than $9,300 and counting. Learn more about Cycle for Survival on the Tucker Ellis team page here.