On January 17, the Tucker Ellis Trial Academy wrapped up its case at the Old Courthouse with “Judge” Bob Tucker presiding. This is the fourth Trial Academy the firm has held since the academy debuted in 2016. The same case, designed by Bob Tucker, has been tried each time with different Tucker Ellis attorneys participating.

The Tucker Ellis Trial Academy is a one-of-a-kind courtroom trial skills program providing intensive, first-hand experience to the firm’s mid-level trial lawyers. The Trial Academy encompasses every part of a real case, from being hired by a client and agreeing upon a fee arrangement and plan, to working up the matter for trial, to finally trying the case to a jury.

For this year’s academy, Brandon Cox and Monee Hanna served as plaintiff’s counsel, while Jack Goldwood and Bisi Ezeolu served as defense counsel.

The mock trial began on January 15 with voir dire, opening statements, and plaintiff’s witnesses. The next day, the plaintiff’s wife and plaintiff’s expert and defense witnesses took the stand. On the third and final day, an orthopedic surgeon was called, followed by closing arguments, instructions of the law, and jury deliberations. The jury, which consisted of volunteers ranging from recent college graduates to retirees, delivered a compromised plaintiff’s verdict.

During the jury deliberations, counsel received feedback from Trial Department Chair Karl Bekeny, as well as Harry Cornett, Rob Hanna, and Mass Tort & Product Liability Chair Laura Hong, and following the verdict, counsel were able to gain insight from the jurors on their case presentations. 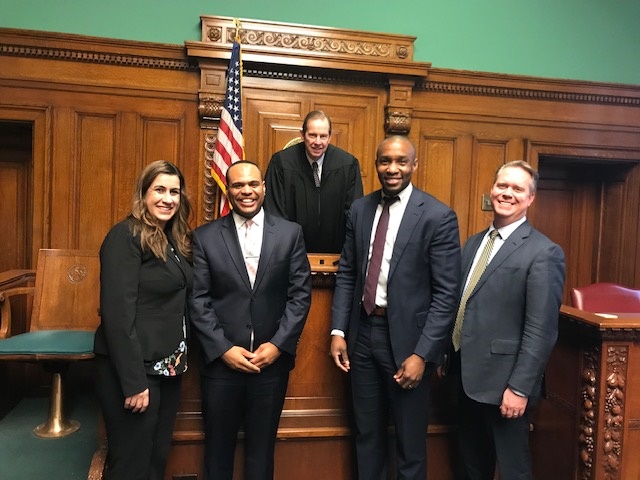